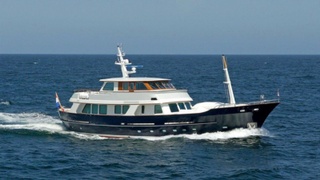 The 27.3 metre Bloemsma & Van Breemen motor yacht Griffioen has been sold by Jeroen van Vliet of Van der Vliet Quality Yachts with the buyer represented by Neal Esterly at Fraser.

Built in aluminium by Dutch shipbuilder Bloemsma & Van Breemen, Griffioen launched in 2006. The expedition yacht was designed by Willem de Vries Lentsch with long distance cruising in mind, featuring carbon folding masts that allow her to pass under bridges on inland waterways.

With interior design by Felix Buytendijk, she can sleep up to six guests in three cabins with accommodation for four crew.

Griffioen has a single Kelvin engine coupled to a Hundested controllable pitch propeller to increase efficiency. The yacht also benefits from bow and stern thrusters and zero-speed stabilisers.