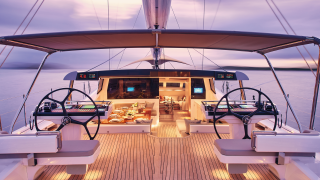 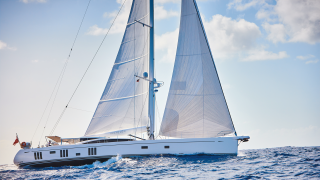 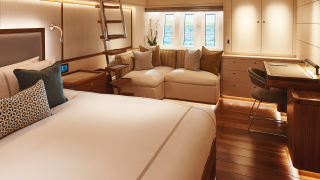 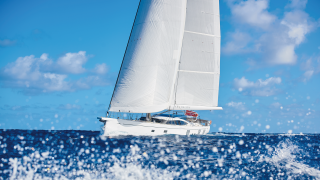 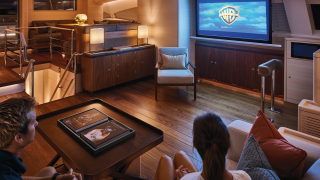 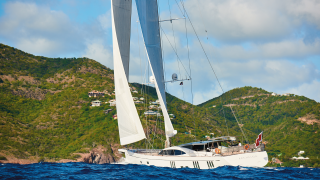 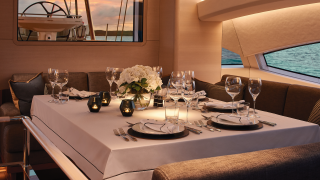 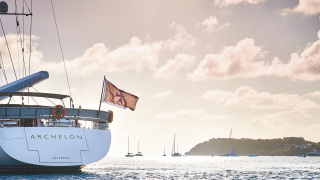 Archelon: On Board the 37 Metre Oyster Sailing Yacht

It is not every day that you run a superyacht down a shingle beach alongside windsurfers, kayaks and paddleboards. Stopping the traffic and closing the busy main road that runs along the Lee-on-Solent shoreline also drew plenty of attention as the 37.45-metre hull and deck were rolled on to the beach before being craned on to a waiting barge.

Moving the first Oyster 1225, Archelon, from her moulding facility at HMS Daedalus to Oyster’s Southampton yard at Saxon Wharf on the south coast of the UK was a major exercise that had been meticulously planned. The level of detail that went into the operation mirrors the careful thinking that has underwritten every aspect of the 1225’s design.

When Richard Hadida bought Oyster Yachts in 2018 and a new era for the yard began, the yacht was already in progress – at the vanguard of a new breed of Oyster and one of few designs that he would keep on. “The first 1225 was probably halfway through her build in Southampton and we completed it with Pendennis,” he says. “Oyster built all the bespoke cabinetry and interior joinery and under our design and guidance Pendennis fitted it.”

On the face of it, Archelon looks just as you’d expect of a modern Oyster, with her distinctive, tinted wraparound saloon windows and plumb bow, a fixed bowsprit and vertical “seascape” portlights in her topsides. But this is an Oyster superyacht that has been designed to cater for an impressively broad range of activities and destinations. From cruising in the familiar grounds of the Mediterranean and Caribbean, to more adventurous high-latitude destinations and circumnavigations, the 1225 is built to take on adventures with ease.

“One of the owner’s fundamental requirements was for a fast cruising yacht that could accommodate his family as well as another family or two,” says the owner’s representative, who oversaw the whole build. “Sharing the experiences with friends and family was key, with room for up to 12 guests when the boat was at sea. The result is five guest cabins aft, with a sixth guest cabin forward if necessary, along with two crew cabins forward.”

The overall layout certainly flows beautifully, with the upper saloon providing a well-protected al fresco-style dining area that leads down to the spacious lower saloon before two sets of companionway steps descend further to the main accommodation.

The ability to configure the four guest cabins as either twins or doubles is an example of Archelon’s versatility below decks. Another is the snug – a spacious cabin forward and to starboard that is pitched as a playroom/ cinema/home schooling area for children (or it could be used as cabin).

Throughout her accommodation the joinery is a pale stained ash and walnut, but when it comes to upholstery she’s far more complex. A collaboration between the owner, the owner’s interior designer Annie Hale and Marcus Wright (then senior interior designer at Oyster Yachts), the upholstery scheme comprises more than 100 luxury fabrics.

When it comes to engineering she’s a more conventional affair, with a 450hp Scania D113 main engine, a pair of Kohler 55kW generators and a Mastervolt system for the inverters, chargers and 1,440Ah lithium-ion battery bank. “The ability to run silent overnight when she is at rest was another important criteria and the Mastervolt lithium ion battery bank is at the heart of this,” explains Archelon’s project manager Ewan Hind.

On deck she boasts an impressively sleek and clutter-free layout, where hydraulically powered captive reel winches for the main halyard, jib sheet and mainsheet keep the number of exposed lines to a minimum.

“Right from the outset we knew that this was a yacht that needed to operate in a variety of environments, so the rig and sailplan configuration was especially important,” says Hind. “As such, the Southern Spars in-boom furling system and the North Sails mainsail were arranged to take a third reef, along with a dedicated storm trysail track on the mast.” There’s also a hydraulic furling inner forestay that will be especially useful for passage- making or high-latitude cruising and can be swapped for a Kevlar inner forestay to carry a hanked-on sail for light use.

So when it comes to her performance under sail, it is perhaps no surprise that she is a comfortable, capable cruiser with long legs.

A snapshot of her performance confirms that all-round capability: in 14 knots of true wind she climbs upwind at ease at 11 knots and almost matches the wind speed on a reach. While in stronger breezes of 20 to 25 knots she will sit happily at 14 to 15 knots. As on the Oyster 885, twin rudders were chosen for performance and efficiency. They can be smaller than a single rudder and therefore offer less drag, while on a heel they remain vertical and in the water.

“Her DNA is very much that of the Oyster 825 and 885s,” says her designer Rob Humphreys. “She is a slender form that carries displacement well. She’s a stiff boat too and with her twin rudders she can be pressed and yet still retain good balance and control. The upshot is that she is a very good all-rounder and, while we were never looking to make her a lightweight flyer, she would hold her own, I’m sure, in a superyacht regatta.”

So while it’s unlikely that Archelon will stop the traffic as she did on the beach at Lee-on-Solent, it is certain that she’ll still turn heads.

Archelon is listed for charter with Ocean Independence.

This feature is taken from the June 2020 issue of BOAT International. Get this magazine sent straight to your door, or subscribe and never miss an issue.

The Best Photos of Sailing Yacht A